The Warden’s House was their home; now they work to preserve it

Since 1937, the three-story log home on the corner of Lake and State Streets has been a fixture of McCall. It has been known by various names—the State House, the SITPA House, the Warden’s House—but to Jo Peterson and Pat Benninghoff, the house is simply known as home.

Jo and Patsy were young children when their parents Art and Doris Roberts moved into the house in 1944. Art had been hired as the Fire Warden for the Southern Idaho Timber Protective Association and the house was part of the deal. For the next 22 years, the Roberts family lived in the home and according to Jo, the “big log house was the place of dreams.”

The house, along with the entire SITPA historical site, was the vision of Harry Shellworth, who co-founded and managed SITPA along with his other jobs in the timber industry. Shellworth planned a centralized headquarters for the organization and wanted to build a showpiece that could highlight the importance of the timber industry and Idaho’s forests. Using labor from the Civilian Conservation Corps and the skill and craftsmanship of Finnish carpenters, the house is a marvel in its simplicity and beauty.

While the house was meant for the Warden and his family, it was also designed to be a guest house for visiting dignitaries who had influence over the timber industry. Doris served as hostess and both Jo and Pat remember the work she did to entertain and provide for the guests. They often helped in making the beds for the revolving door of visitors including Idaho governors, members of the State Land Board, Idaho State Foresters, presidents of Boise Cascade, and various others.

But when the girls weren’t helping their mother, they embraced McCall and all it offered. According to Jo, they were “free from dawn to dusk to explore and invent and discover all on our own.” From the lake, to the river, to the Little Ski Hill, the girls experienced life in McCall and they loved it.

Although born 11 months apart, because of their birth dates, the girls were in the same grade in school. They learned the same lessons, had the same friends, shared the same activities. They also shared the same bedroom, first settling into the twin bedroom on the northwest corner of the house before moving into the northeast bedroom. They had a work table and a record player, and a SITPA employee built them a bookcase. The book case remains in the room today. As sisters do, they would occasionally squabble. One time, Pat taped a line between their beds, claiming one side as hers and off-limit to Jo. The arrangement didn’t last long.

The house was also perfect for sleepovers for friends both in summer and winter. Patsy and Jo often invited their friends to stay the night after school activities such as basketball games. Today they still host those friends with class reunions held at the house, where their old classmates reminisce about their times there.

While the girls attended grade school in McCall, for high school they were bused to Donnelly, part of an agreement between the communities of Donnelly and McCall.  They graduated in 1958, part of the last graduating class of Donnelly-McCall High School.  The following year, the first high school opened in McCall at its current site.

Pat and Jo attended the University of Idaho. They graduated in 1962 with teaching degrees. During college, Jo met Doug Peterson. They married in 1961 and returned to Moscow to finish their schooling. They settled in Las Vegas.  Pat moved to Roseburg, Oregon after college, where she met Paul Benninghoff. They married in 1964 then moved to Portland. Both weddings took place at the McCall Community Congregational Church with their receptions held in the beautiful Warden House yard. Both women went on to have successful teaching careers.

In 1966, Art and Doris Roberts left SITPA. Pat and Jo were busy starting their own lives, so the impact of the move was not significant at the time. And the family always knew living in the house was temporary as it did not belong to them. Still, it was definitely their home. As Jo stated, “our family loved every log, every wastebasket, every rock in the fireplace from the moment we walked into that work of art. We loved everything about it. I doubt any little girl loved her childhood home more than I did.”

While modifications had been made to the house while the Roberts lived there—an oil furnace, updates to the kitchen and bathrooms—they made sure the house and all of its furnishings remained true to the original concept. But with new wardens came changes. Furniture and fixtures were removed, kitchen cabinets were painted, shag carpet covered the stairways. The maps that had lined the walls of the dining room and sunroom were put in storage. The exterior of the house was painted barn red with white trim and the shake roof was replaced with tin. The house, while structurally still grand, began to lose its appeal.

Then in 1991, 25 years and three wardens later, SITPA’s operation had grown so much, the original site could no longer meet its needs.  A new site on Deinhard Street was chosen, and to cover the costs, the decision was made to sell the original property. Numerous ideas were floated, including tearing down all the buildings, including the house, and replacing them with condos. But locals from McCall rallied, and with the help of Kitty Gurnsey and Gayle Wilde, Idaho State Representatives who had ties to McCall, the State put up funds to buy the new SITPA location and in the process gave the original site to the City of McCall, with the understanding that its historical significance must be maintained. The result was the creation of a nonprofit organization which became the Central Idaho Historical Museum, whose guiding mission is to preserve and maintain the original SITPA site and buildings.

The love and respect Pat and Jo had for the Warden’s house as children has not diminished with time. When CIHM took over the property, Pat and Jo became major benefactors to help restore the Warden’s House to its original glory. Not only did they establish a dedicated fund for its preservation, they did the work.

One of their major efforts involved the kitchen. Working with their husbands and good friends Rosalie Jones, Bruce Fleming and Richard and Peggy Miller, they stripped three layers of paint off the cabinets and refinished them, using a dental pick to chip paint off the walls. They also pulled two layers of tile off the floors and replaced it with a linoleum that closely matched the original. They were even able to find art deco cabinet pulls almost identical to the originals which had been removed and tossed in the 1970s.

The sisters contributed to the re-sanding of the hardwood floors in the main living areas, then with Rosalie, pulled the shag carpeting that covered the stairs and redid those. They removed the tile in the upstairs bathroom, replacing it with linoleum matching the kitchen. Rosalie was also instrumental in finding a close replica of the original dining room light which had been removed in the 1950s.

The sisters’ generosity is evident throughout the house. Their funding helped restore the furniture in the warden’s bedroom, replicate the original back door, and refinish the log wall in the kitchen that had been severely damaged. In the summer of 2022, they financed the reroofing of the grand house, replacing the tin with a composite shake roof to match the original.

Every summer, when possible, Pat and Jo visit McCall and host their class reunions in the house. Sometimes when they are there, people come by the museum and get a real treat when the sisters lead them on a tour. They enjoy telling the stories of their lives in the house. According to Jo, sometimes she sees people’s eye glaze over, but she just can’t help raving about the place.

Most of all, the sisters want people to recognize the wonder of the grand house, in both its beauty and architecture. But more than that, they want people to know the “joy that big old log house gave people lucky enough to share it.” Going forward, they would like to see the house used for social gatherings, claiming it “needs to be full of people talking and laughing and having a good time.” And no one who has seen the house and stared in wonder at its craftmanship would disagree in their assessment that “the house is special for so many reasons.” 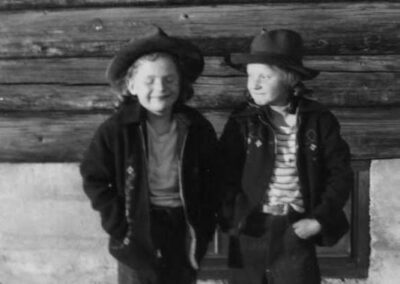 The Sisters outside their home 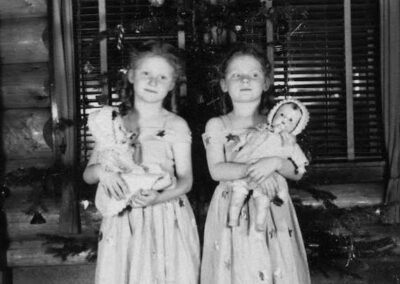 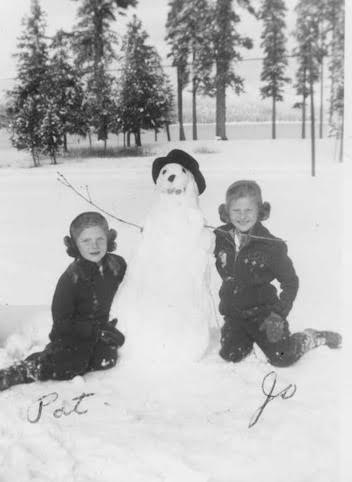